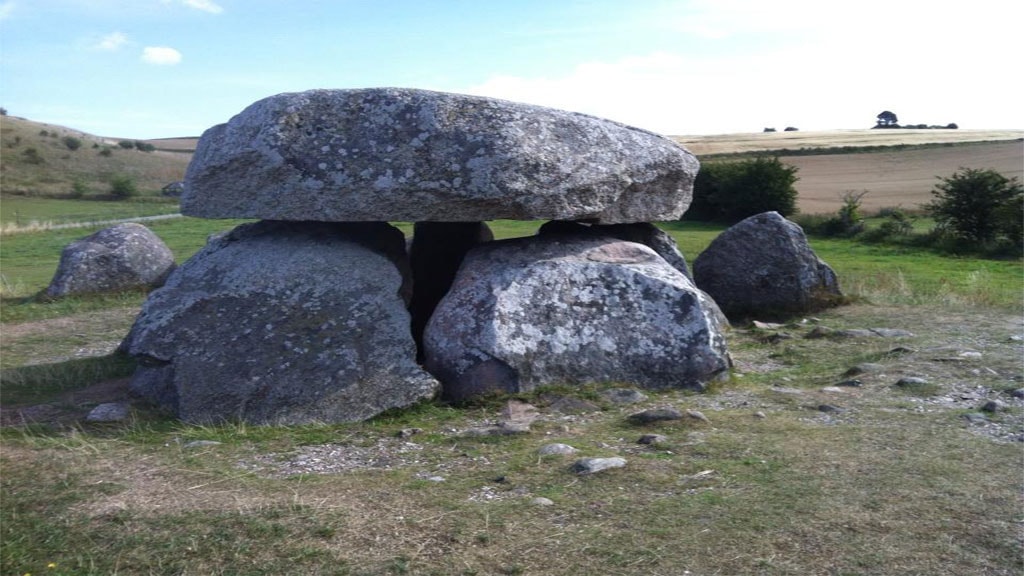 The Stonehenge is said to be aligned with the rising sun of the summer Equinox and many other stone circles are believed to have been constructed in similar ways. True or not, the fact is that at Spring Equinox you will see the sunrise above the hills if you look out through the entrance to the Poskær burial chamber.

Denmark has a large number of Dolmens (Cromlech), Stone circles and other Megalithic sites. Today 2500 Dolmens remains from an estimated number of 25.000. Poskær Stenhus is from around 3.300 BC and is the largest round barrow in Denmark. The circle of the 23 giant 5 tons heavy stones is 20 meter in diameter. As you can see when you look around one stone is missing. This no 24 stone was removed by a stone cutter in the 1890s who had bought it all to cut it into pieces.
Fortunately, the local parish executive officer found out and stopped him. The large cap-stone weighs around 12 tons. It is believed that all the stones have been transported from the beach of Knebel bay 2 km west of the place. The cap-stone is a twin stone. The other part of it which is 19 tons has been used for another dolmen 2 km from Poskær. The area east of Poskær is the very beautiful Mols Bjerge which is one of the candidates for a coming Danish National park. It became Danish National Park in 2007.